Incorporating node-based image processing, the DaVinci Resolve provides color correction, power windows, and effects for nodes that offer a powerful color correction medium as compared to layers. Faster workflows in real-time are offered via the Resolve control surface. You are also provided with 32-bit floating point and YRGB image processing allowing you the highest depths in color correction. The Resolve control surface incorporates a slide-out keyboard that is useful when naming or renaming files, and can be neatly tucked away when not in use. All functions are accessible via separate keys such as reference keys and the fader T-bar that allows you to wipe between reference stills.

You can easily control the image sections via keys that are located for easy access along your natural hand positions. Lift, Gamma, and Gain adjustments along with RGB control is achieved via trackballs. Menus and indicators are visible via 5 high-resolution LCD displays that offer a view of functions of 62 knobs and buttons. Soft knobs that can precisely control parameters via single touch are provided, and no electrical contact eliminates wear out of the knobs. Aesthetically illuminated keys are backlit using RGB color and intensity. Complete control of project timeline or deck is offered via the jog/shuttle knob and transport controls. 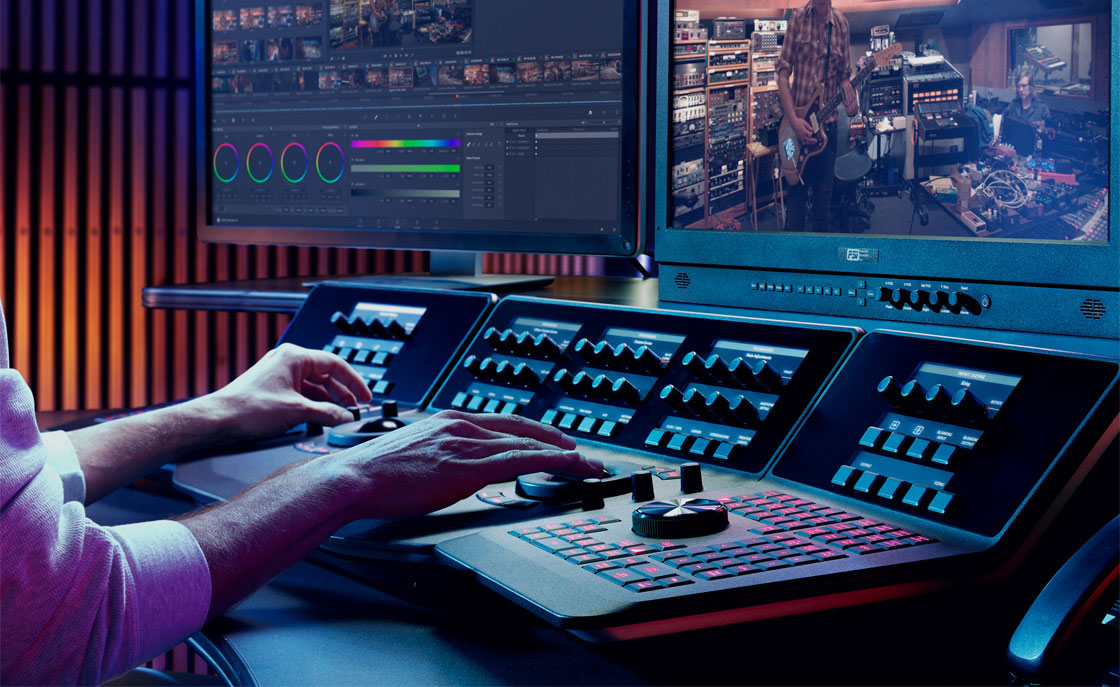 The DaVinci Resolve Control Surface panels feature workflow ergonomics and ease of use so Colorists can quickly and accurately construct simple or complex creative grades. The panels feature highresolution liquid crystal displays (LCD) and backlit hard keys to accommodate a darkened grading environment. The color and intensity of the keys and the LCD panel brightness are user programmable so each Colorist can set up his/her personal panel configuration. There are three panels in the control panel set. The center panel is the Trackball panel. The majority of controls and feedback for the Colorist is found on this panel, including a slide-out keyboard.

On either side of the Trackball panel are two interchangeable panels, the position of which is determined by operator preference. The T-bar panel, shown above on the left, has a T-bar mix/wipe control and a number of menu and function keys. The Transport panel, shown above on the right, has the timeline transport controls and a jog/shuttle control as well as a numerical keypad and associated function keys.

A key feature of the panel design is the feedback given to the Colorist. The LCD panels provide a color and value indication based on the last control adjusted. The hard keys also reflect the last button pushed and, in some cases, other keys on the panel are illuminated or dimmed based on the menu options available for the operational mode selected.